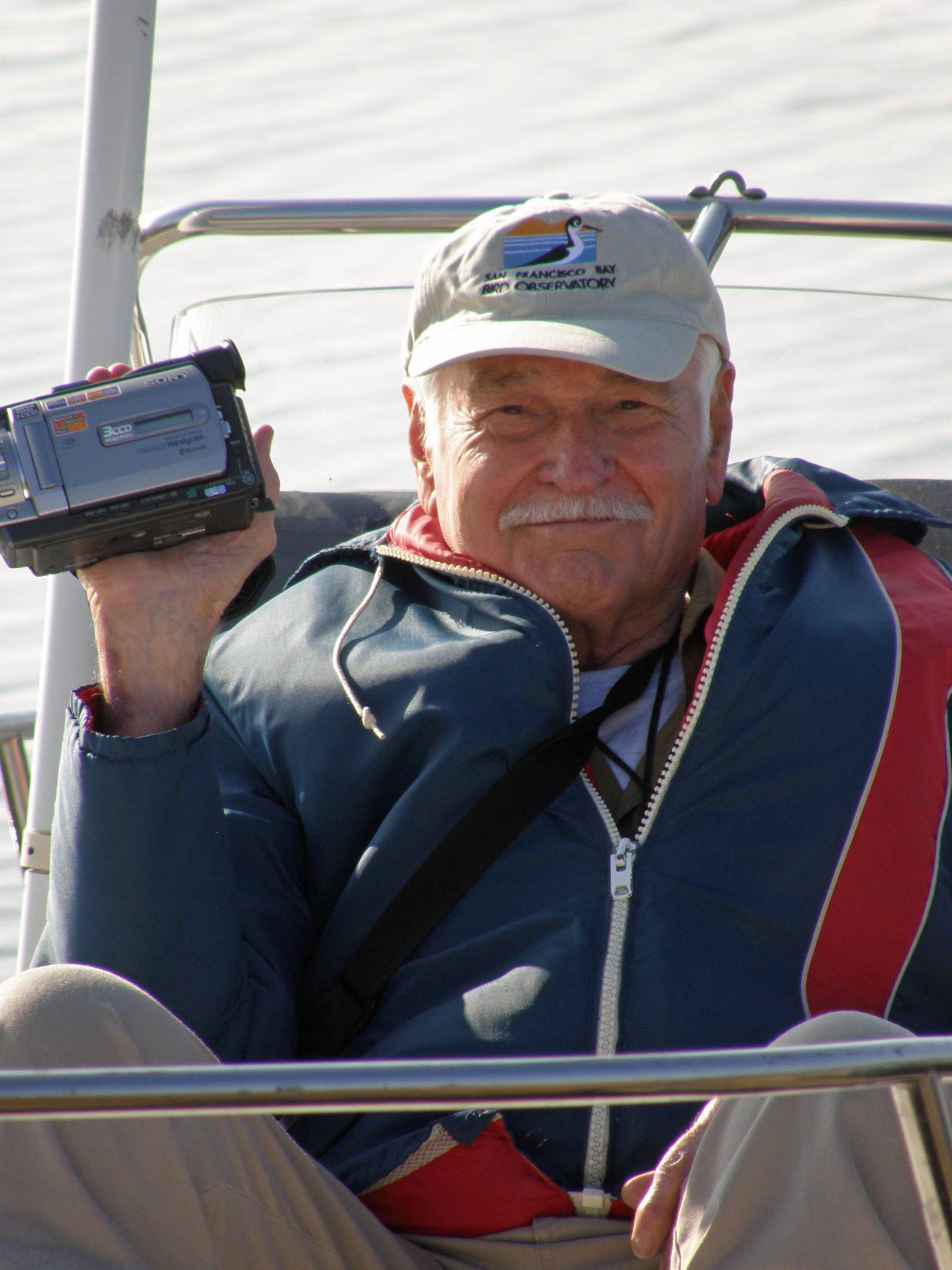 As the slow path to the restoration of Bair Island to a tidal salt marsh continues, it is time to honor the man who had this vision over 30 years ago. Ralph Nobles, who died February 20, 2015, knew in his heart that building on irreplaceable wetlands was bad for us and bad for the planet.
In 1983 in response to the Redwood City Council plan to allow Mobil Oil to build a huge development on Bair Island, Ralph and his wife Carolyn responded by forming Friends of Redwood City and leading a referendum whose goal was to stop the development and return the diked salt flats to a salt marsh. The history of the Friends and the numerous individuals and environmental groups that rose to the challenge is the stuff of legends; Bair Island is now part of the Don Edwards Wildlife Refuge.
Ralph was an intelligent, fearless, and tenacious leader. He was also a gentle man with a wry sense of humor. Fighting City Hall was an uphill battle but Ralph believed that the Friends would prevail. His legacy, along with Carolyn's, and all the people engaged along the way, resides in the permanent refuge called Bair Island.

In the spring of 1982, Ralph Nobles drove home from the airport just in time to make it to the Redwood City Council Meeting. It was the night they were voting on a huge development on Bair Island, 3,000 acres of former tidal marsh along Bayshore Freeway near Whipple Avenue that had been levied from the bay for commercial use. 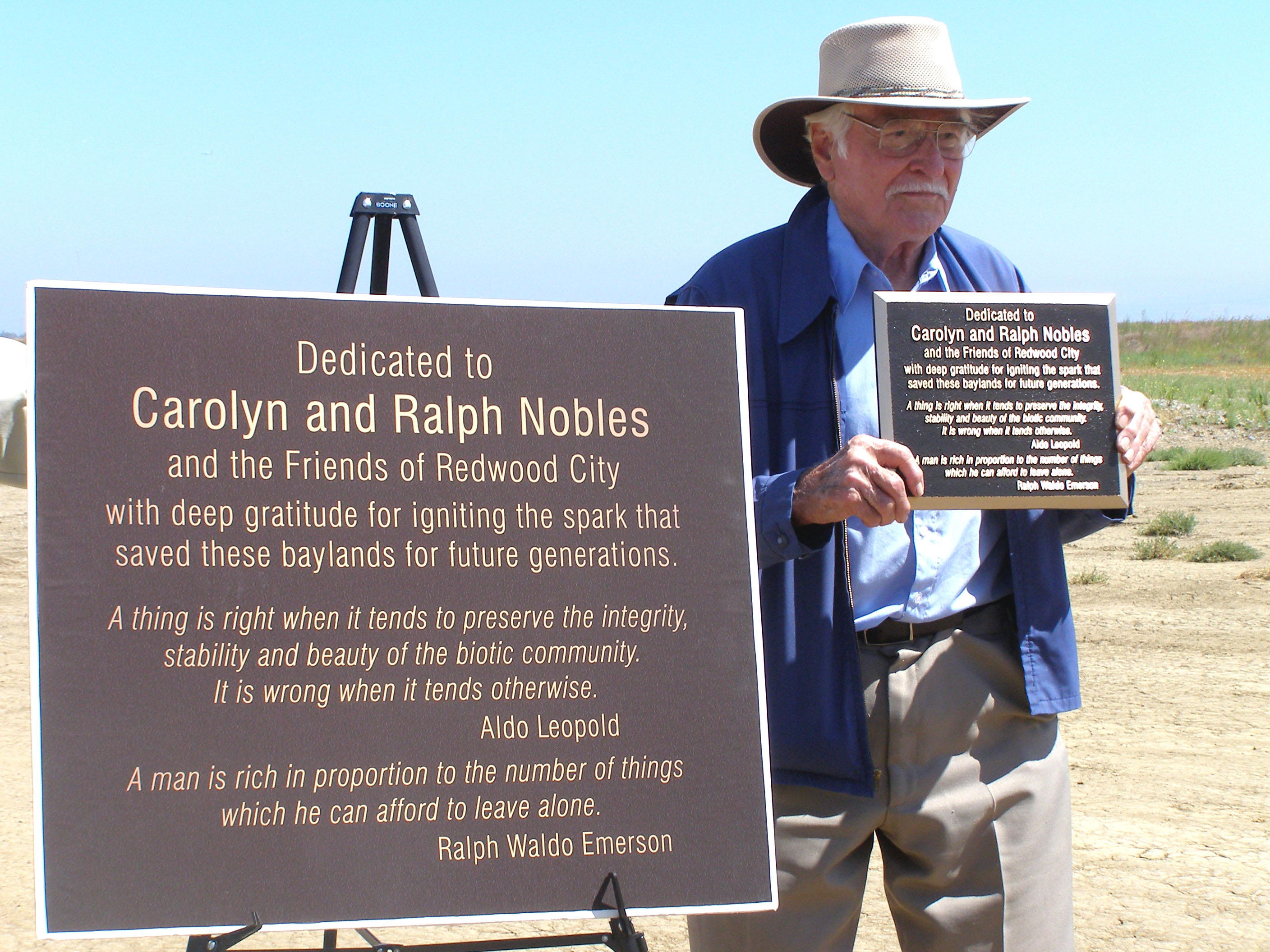 Ralph was stunned to witness the devastating vote in favor of the Mobile Lands massive plan. He stood around the foyer of the meeting room after the vote with a group of like-minded residents. What to do?
They took a daring step, and decided to file a petition to referend the council's action.
The group had the tremendous impetus that came from their conviction that they were doing the right thing for their town, for the peninsula, and for that site.
Ralph and his wife Carolyn opened their home to regular meetings. It was a full-blown campaign, with flyers, talks to all manner of groups, even including street corner public demonstrations. Imagine the gloom when, on election day, they lost, but Carolyn went down to the city hall the next day to watch the absentee ballot count. Those votes reversed the rest, leading to a victory by 40 votes!
Ralph had been traveling on the East Coast, but Carolyn didn't mind waking him from a sound sleep to tell him that good news. He called her back the next morning to tell her about the dream he had that they had won! Indeed they had.

Ralph epitomized the strengths of the Citizens Committee.
A brilliant scientist giving us the ability to respond to environmental documents with great expertise, a person passionately dedicated to preserving our Bay and its wetlands and, most of all, the nicest person imaginable.
I had the wonderful opportunity to spend a week with Ralph in Venezuela helping a fishing village in its struggle with Cargill Salt, striving to keep Cargill from diking off parts of Lake Maracaibo for salt ponds.
Charismatic as always, everyone wanted to talk to Ralph, often saying he looked like a movie star. Courteous and engaging, Ralph made the trip a huge success.
We shared wonderful experiences including a canoe ride with the fisherman to an existing Cargill levee - on which walked guards with submachine guns - and our guides taunted them!! Quite exciting - to say nothing of our engine failing in the middle of a marsh.
But my best memory is simply having spent so much time with Ralph.